Beanstalker and other Hilarious Scary Tales by Kiersten White

Think you know the story of Jack and the Beanstalk, Jack and Jill, Cinderella, Snow White, Red Riding Hood?  Well, maybe if you throw a twist or two or three or four or well...you get my meaning.  In this story, there are surprises throughout the tales as White twists these familiar stories together.  And, the voice she uses to tell the story is like she is sitting in the library telling me the story yet getting distracted along the way--then, getting back on track--then, getting distracted, again, you understand where I am going.

Posted by goodbooklady at 1:18 PM No comments:

I Am Princess X by Cherie Priest

May and Libby are best friends in fifth grade when they decided to create a character named Princess X.  Libby created the drawings, and May wrote the story.  Then, tragically, Libby died in a car accident.  May's parents get divorced, and she moves away.  Years later, May comes back to visit her father for the summer, and she sees a picture of Princess X.  Then, she sees another and more and more.  She cannot believe it.  How could someone have stolen their character?  May must get to the bottom of this.  Is it possible that Libby is still alive?  If so, she is in danger.  May must figure this out.  If Libby is still alive--can May find her in time to help her?  Find out in I am Princess X.
Posted by goodbooklady at 8:12 PM No comments:

The Window by Amelia Brunskill

Jess and Anna are 17 year old twins who are close, but they have drifted apart in the last few weeks.  Jess doesn't know why, but she decides that she is going to talk to Anna about it.  Jess is in class, and she is called out to talk to her parents.  Anna was found on the ground outside her window--dead.  How did this happen?  Was it a suicide or an accident?  Jess cannot believe that it is true until she sees the body for herself.  The police rule it an accident, but Jess cannot believe their rendition of what happened.  She knows there is more to the story, but is she ready to find out what more there is? There are many dark secrets that her sister was hiding, but will Jess be able to figure out what they are in time to protect others in the town?

I liked this book, and thought the author did a good job of bringing suspense to the end of the chapter so that I could not put it down.

If you like a good suspenseful mystery, pick this one up.
Posted by goodbooklady at 7:51 PM No comments:

Rashad is getting ready for a party because he is ready to cut loose with his friends and leave his responsibilities behind.  Before he goes, he wants to stop at the local store and get some snacks.  He picks up his snacks and remembers that his money is in his bag.  He bends over to get the money, and a woman who was also there to pick up something on the way home trips over him.  Before they can untangle the mess, a police officer steps in to break up what he assumes is a theft and assault on the woman.  Rashad is caught, and the police officer takes him to the floor.  Then, he takes him outside and yells that he is resisting arrest and begins to beat him.  The beating is bad, really bad, very bad.
On the street, Quinn sees the beating, and he cannot believe his own eyes.  The police officer is the brother of one of his best friends and has been a big brother figure for him after his father died.  He does not know what to do.  He decides that he has to run and get away from what he has just witnessed.
Rashad goes to the hospital, and Paul, the police officer, is put on administrative leave while the situation was investigated.  Quinn does not want to believe that Paul was wrong, but he cannot ignore what he saw even though he is being pressured to do just that.
This story is told through the lens of these 2 boys as they tell about their experience from one Friday to the next Friday.  One week in the lives of 2 boys tells a story that must be told because we need to understand how it affects us all.

I highly recommend reading this story.  I hope that you will read the book, and understand more.
Posted by goodbooklady at 7:40 PM No comments:

The Revealers by Doug Wilhelm

When is enough going to be enough?  This is the question that 3 middle schoolers ask themselves at Parkland Middle School.  They have been bullied, and they are not the only ones.  But, bullies are many times crafty and do things when the adults are not looking.  Then, they even blame the altercations on the kid who is being bullied.

Russell along with 2 others decide that they will fight back with an anonymous board where they can post exactly what is going on in the school with the hopes that things will change.  But, the bullies don't like their actions being in the spotlight, and they may not go down so quietly.

This is a great story about being able to speak up and fight back when you see things that are just not right.  If more of us do that, there will be fewer problems and more solutions.

Try this good read by Doug Wilhelm.  You will be glad that you did. 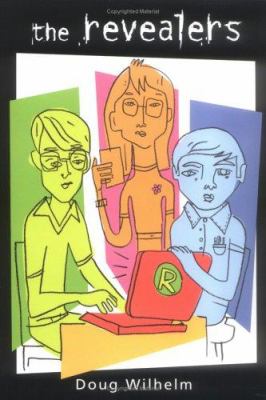 Posted by goodbooklady at 8:09 AM No comments: