Mapping the Bones by Jane Yolen

Chaim and Gittel are 14 year old twins who must endure unbearable hardships during the Holocaust.  In 1942 Poland, the Abromowitz family is forced to share an apartment with another family who are less than hospitable.  Though the other family is hard to deal with, the Abromowitz family cannot leave them behind especially when the father goes missing.  Chaim must overcome his fear to sell his mother's engagement ring to get the money to leave the ghetto before they are all deported to a concentration camp.  They make a plan to go through the forest, but not everyone makes it through.  When, Chaim and Gittel meet up in the forest, they have hard choices to make about who they will be able to trust.  Needless to say, they met more horrible people including Dr. Mengele who wants to perform awful experiments on them.  How will they survive?  But, they must survive.

I have to admit.  This story was hard to read.  Stories about the Holocaust are hard to read.  The atrocities seem unbelievable.  But, that is the EXACT reason that I must read them and share them with as many people as I can.  They happened.  If they happened due to hate and ignorance and bystanders looking the other way, then it could happen again if we do not do something.  This story will not be an easy one to read.  You will be disgusted by the awful part of humanity that reared its head during this time in history.  But, Yolen is able to weave in glimmers of hope as well.  Chaim is a poet, and she adds that piece to the story which shows how important poetry can be to help people express themselves and the thoughts of a group of people.

After writing The Devil's Arithmetic over 30 years ago, Yolen said that she would not write another Holocaust story.  It took her 4 years to write this one.  But, she did it because this story is one that needed telling.  Being her 365th or 366th book (because she had 2 drop on the same day), you need to read it.  Hear what Chaim and Gittel have to say.

Posted by goodbooklady at 6:09 PM No comments:

After Ever After by Jordan Sonnenblick

Jeffrey was diagnosed with leukemia when he was 4 years old.  We learn about his illness and his brother, Steven's, story in Drums, Girls, and Dangerous Pie.  Now, Jeffrey is 13 years old, and he has to learn to navigate life after leukemia in middle school.  He is known as the kid who had cancer, and he wants to move past it.  Will he be able to do that?  And, Steven is absent.  He is half way around the world and does not respond to emails--no matter how many Jeffrey sends to him.  Jeffrey is not sure how to make it without his brother especially when the pressures of middle school start weighing on him.  Take my advice.  Read this book AND Drums, Girls, and Dangerous Pie.  It really is a must!

When I read Knockout, I was reminded of After Ever After because they are both stories about the little brother who was sick and is now navigating life in middle school.  The authors wrote them in very different styles, but you will tissues with both of them.  I am pretty sure there is a man who works out at the YMCA who still tells of the crazy woman sobbing next to him on the treadmill.  That crazy woman would be me.  I laughed and cried throughout this book.  You will NOT be disappointed with this great read.  (But, honestly, go ahead and get both.  You can't read just one.) 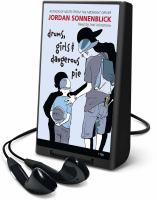 Posted by goodbooklady at 5:34 PM No comments:

Knockout by K A Holt

Levi wants to be treated like a regular kid.  Yes, he was very sick as an infant.  But, he is fine now.  Really, he is.  Mostly, he is.  At least, he hopes he is.  His mom and brother are overprotective is all.  His dad understands.  He wants to participate in a sport.  At least, his dad wants him to participate in a sport.  Levi decides that he will try boxing to satisfy his dad and see if he really is okay.  The thing that is COMPLETELY unexpected is that he is really good at boxing.  What will happen if his mom and brother find out?  Will he be well enough to find out how good he really is at this sport?  You can find out in Knockout by Holt.

Now, the thing that I did not mention is that this is the sequel to House Arrest.  Levi was the sick infant whose brother risked everything to save and whose dad ran out when he could not handle the pressure.  Levi doesn't know what we as readers of the first story know.  He has to figure it out for himself.  And, I can honestly say that Holt delivers a great "rest of the story" for Levi. 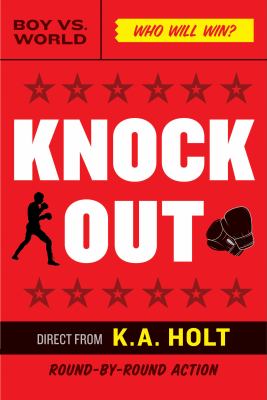 Posted by goodbooklady at 5:20 PM No comments: